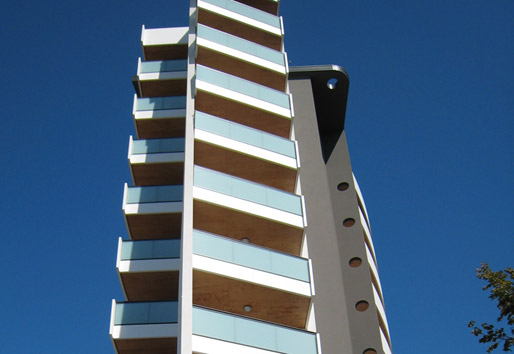 Tower building of eleven floors above ground and basement


The building called "Wave Palace" was built with reinforced concrete structure. In particular: the load-bearing vertical structures are formed by the baffles and walls of plant curve in order to generate the effect "wave" that characterizes the building; the horizontal elements are made up of monolithic reinforced concrete floor slabs. For the realization of the basement, having regard to the presence of groundwater and, in particular, having regard to the presence of buildings in the border, were made perimeter of the diaphragms, which function as hydraulic seal and resistance to the thrust of the ground; particular attention has been devoted to the study of the stages of excavation and bracing of the diaphragms. In addition, given the high loads transmitted by the structure and given the limited geo-mechanical properties of the soil, it was necessary to adopt a system of deep foundations like "diaphragm".